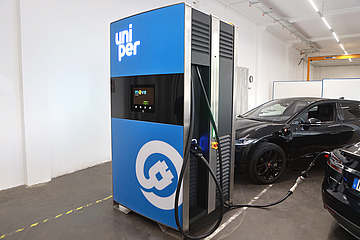 The ideation and development process of Uniper’s Mobile Fast Charging Solution was supported by FEV Consulting and EVA Fahrzeugtechnik. FEV Consulting combines top management consulting expertise with the technical capabilities and knowhow of the FEV Group. EVA primarily specializes in e-mobility as a subsidiary of FEV Group in the business segment Electronics & Electrification. Source: FEV Group

Aachen, October 2020 – FEV, a globally leading service provider of vehicle and powertrain development for hardware and software, supported Uniper from ideation to Proof of Concept (PoC) of the Mobile Fast Charging Solution (MFC), an innovative charging infrastructure approach. One prerequisite for the successful transition of e-mobility from niche to mass is an efficient charging infrastructure. However, especially at places with fluctuating charging demand, operators are reluctant to install stationary charging stations given the lacking business case.

Uniper’s power bank for electric vehicles addresses this issue. It can be used to cover peak demands without the need of large investments into grid reinforcements and transformer stations. MFC is capable of operating independently from the power grid. Once the batteries are drained, the station is replaced by a new one.

Key facts and data also include:

In the first step, FEV Consulting supported Uniper by deriving business model ideas for applications of MFCs, before a consumer survey was conducted to confirm the business model analysis. Eventually, FEV Consulting and EVA Fahrzeugtechnik, a subsidiary of FEV Group in the business segment Electronics & Electrification, developed and manufactured a unique Mobile Fast Charging Station for Electric Vehicles from scratch.

As the key integrator of the mobility ecosystem, the company leveraged its extensive partner network to identify and select state-of-the-art, market leading components for the PoC including battery unit, power electronics, and cooling system. FEV managed to install a reliable microgrid that allows vehicle charging without grid connection despite the usage of independent, non-harmonized components from different sources. Thus, the Proof of Concept paves the way for Uniper to become an Infrastructure-as-a-Service provider.

Despite the compact dimensions of 1.2 m x 1.25 m footprint and 2.5 m height, the Mobile Fast Charger provides 150 kWh usable energy capacity, corresponding to up to 1,000 km pure electric driving range. In addition, the device allows to charge two Electric Vehicles through both charging standards, CCS 2.0 and CHAdeMO, with up to 75 kW power in parallel. To handle the intense heat generated in the compact housing at this power flow, FEV integrated a high-performance cooling system and developed a dedicated cooling strategy. The system layout not only allows for high charging currents, but also guarantees safe operation of the MFC even at extreme weather conditions. Beyond that FEV will hand out the PoC with a CE certification, as the device complies with the most stringent safety requirements and has been successfully tested at an EMC lab.

Additionally, the Mobile Fast Charger can be managed as an Internet of Things (IoT) device, allowing for remote condition monitoring and organization of operations. To ensure this, FEV has developed a highly complex Operational Management System (OMS) for error-free operation of the PoC as well as distant access to real-time data. Through the remote access, Uniper can track operating conditions, such as battery temperature, state of charge and charging power as well as the acceleration and location of the station. Furthermore, the billing process of the IoT device can be managed via the backend connection.

The PoC is the first step for Uniper to evolve on the journey to become a key player in the charging infrastructure market.

About Uniper
Uniper is a leading international energy company with around 11,500 employees and activities in more than 40 countries. With about 34 GW of installed generation capacity, Uniper is among the largest global power generators. Its main activities include power generation in Europe and Russia as well as global energy trading, including a diversified gas portfolio that makes Uniper one of Europe’s leading gas companies. In 2019, Uniper sold a gas volume of about 220 bcm. The company is headquartered in Düsseldorf, being the third-largest listed German utility. Under its new strategy, Uniper aims to become carbon-neutral in Europe by 2035.