About usWhat we doNewsCareerMediaContact
Languages
08. October 2020 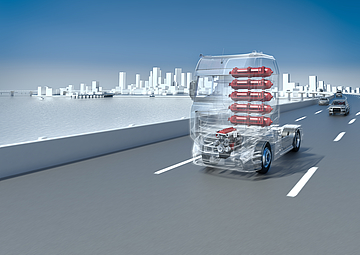 FEV is developing hydrogen internal combustion engines as a robust, cost-efficient option for zero CO2 transport that can be implemented quickly under the current production infrastructure and also offers potential for existing vehicles. Source: FEV Group

Aachen, Germany, October 2020 – Ever since the European Union initiated the “European Clean Hydrogen Alliance” in July 2020, the hydrogen ICE (Internal Combustion Engine) has increasingly been in the spotlight in the mobility industry’s debate on zero-emission drive solutions. Aachen-based FEV, a leading international vehicle and powertrain developer, welcomes this openness to technology regarding future mobility solutions and has nearly four decades of experience in hydrogen engine development.

The expansion of e-mobility is seen as an important step toward achieving the set climate targets. “However, we must always consider the relevant application scenario when making technology choices,” said Professor Stefan Pischinger, President and CEO, FEV Group. “This has prompted a significant step-up of the debate surrounding the hydrogen engine as another sustainable drive form with vast potential for numerous areas.”

As a zero CO2, renewable energy source, hydrogen can be transported over long distances and used to store large amounts of energy. Hydrogen use has the potential to decarbonize parts of the transport sector where electrification through using heavy batteries is inefficient, including for commercial vehicles, buses, large passenger cars, and even trains and ships.

The infrastructure, which is expected to be in place by 2030, is reviving the debate on what would be the most appropriate way to use hydrogen. The one advantage that fuel cells have is their high degree of efficiency at low loads. But at higher specific loads, their efficiency level deteriorates in comparison with the hydrogen internal combustion engine whose degree of efficiency may be poorer at low loads, but increases the higher the load. In other words, the efficiency benefits vary depending on the load.

Despite the known advantages, fuel cell development is still in its early stages, and very few development and testing methods have taken root so far. The hydrogen internal combustion engine, on the other hand, is a robust, cost-efficient option for zero CO2 transport that can be implemented quickly under the current production infrastructure and also offers potential for existing vehicles.

Because hydrogen is a carbon-neutral fuel, only minimal amounts of the emission components hydrocarbons (HC), carbon monoxide (CO), carbon dioxide (CO2), and soot are produced from burnt lubricant. The reduction of oil consumption is thus another focus of development. The main exhaust gas component is nitrogen oxide (NOx). Thanks to its very high laminar rate of combustion and broad ignition limits, hydrogen allows for lean burning with a large amount of excess air. Its low exhaust gas temperatures mean that – even without exhaust gas aftertreatment – the level of nitrogen oxide is already below the current limits. Aftertreatment is an effective means of further reducing the NOx emissions. Efficient lean burning also produces a consumption advantage over conventional combustion engines.

FEV has nearly forty years of experience in this field and a track record of successfully completed projects – from the development of hydrogen internal combustion engines for passenger cars and commercial vehicles right through to stationary and off-road engines. The company’s extensive range of services also includes the development of individual components such as injectors for direct injection and multi-stage charging systems. FEV also applies its extensive expertise from developing conventional drivetrains to its development of hydrogen engines.

“Our customers appreciate the fact that FEV is a one-stop shop that can deliver all development services from end to end,” said Professor Pischinger. “This includes development and design, construction, vehicle integration, commissioning, calibration, and testing of components and complete hydrogen engines.” FEV operates dedicated test benches in Aachen, which have testing capacity for hydrogen internal combustion engines with an output of up to 640 kW.