About usWhat we doNewsCareerMediaContact
Languages
17. June 2019 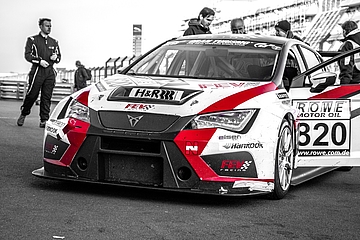 Aachen, June 17, 2019 – FEV Racing is celebrating its 20th anniversary at the Nürburgring. On the long upcoming weekend on the Nürburgring-Nordschleife, more than 150 teams compete on the 24 kilometers of the world-famous race track, also known as “the Green Hell”.

The 24-hour race casts its shadows ahead and this year has a very special anniversary in store for the team, fans and spectators. FEV Racing was founded in 1999, exactly 20 years ago, and has stood for passionate motorsport for two decades.

FEV Racing had many faces over the past 20 years. Starting as a partner of established teams, such as engine developers for the legendary Eifelblitz, the team has been competing since 2017 with a Seat Cupra as an independent team as part of the Endurance Cup on the Nordschleife. One of the most important endurance races in the world will take place there. After a difficult race in 2018, the team still has a score to settle this year and will again fight to see the black and white checkered flag after 24 hours.

At the wheel of the Cupra TCR sits a powerful cast:

Benedikt Gentgen, André Gies, Martin Pischinger and Lukas Thiele will play their part in making the 24 hours a successful race. The team behind it is also highly motivated and has even been strengthened compared to last year.

With access to the paddock and numerous opportunities to follow the race at various points along the track, fans will have the opportunity to experience motorsport up close and personal.

Last year, 210,000 spectators gathered at the circuit to follow the race spectacle on the spot. More than 30 international TV stations will also broadcast the race live – in Germany, RTL Nitro will broadcast for more than 26 hours.

Those who would like to support FEV Racing on site are cordially invited to visit the team at the Nürburgring:

The Twitter channel @fevracing provides live coverage of the race.