About usWhat we doNewsCareerMediaContact
Languages
25. February 2021 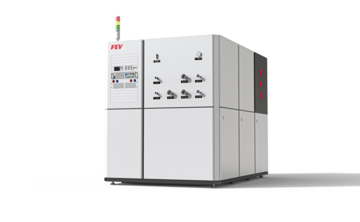 Aachen, February 2021 – FEV, a global leader in vehicle and powertrain development for hardware and software, is taking on key tasks at the European consortium StasHH: The EU-funded project will define, develop and test the first European standard for fuel cell modules in heavy-duty applications.  FEV can draw on more than twenty years of experience in the field of fuel cells and a large number of successfully completed projects - for example, in the development of fuel cells and their testing and benchmarking with extensive results databases.

In addition to FEV, the StasHH consortium includes eleven suppliers of fuel cell modules, nine OEMs and four research, engineering, and testing institutes who want to decisively improve the market position of fuel cells through standardization. This should reduce costs in the future, enable mass production and promote competition.

For heavy-duty applications such as buses, trucks, trains, ships and construction machinery, heavy battery-electric drives are usually not efficient. Fuel cells, on the other hand, hold enormous potential as a sustainable form of propulsion, particularly in these scenarios, and can make a significant contribution to achieving climate targets.

"We are pleased to be able to contribute our long-standing expertise in fuel cell technology to StasHH," said Professor Stefan Pischinger, President and CEO of FEV Group. "The integration of this technology is an important step to achieve CO2-neutral mobility in the transportation sector."

The planned standardization of fuel cell modules includes physical dimensions, flow and digital interfaces, test protocols as well as safety requirements. FEV's tasks in this context will include the development of the standardized test protocols and test execution. The company will also coordinate the implementation of the developed standard at the fuel cell manufacturers and subsequently test them.

Extensive testing capabilities
FEV has appropriate facilities and state-of-the-art measurement equipment at its test and development centers. This includes a hydrogen-capable climate chamber suitable in size for fuel cell systems, a fuel cell stack test bench, a fuel cell vehicle dynamometer, test benches for component tests and several fuel cell system test benches. Accelerated aging tests, for example, can also be implemented. In addition, FEV has the necessary hydrogen supply infrastructure - this e.g. is required in order to be able to perform endurance runs. Within the StasHH project, a rig tailored to the standardized modules is also being developed for efficient validation of the performance, safety and operation of the modules under extreme conditions.

After successful standardization, the "HH-series" will be the standard for fuel cell modules, analogous to the size nomenclature known as the "AA-series" for batteries. An adoption of the defined standard outside Europe is also pursued. The StasHH project is funded by the Joint Undertaking (JU) Fuel Cells and Hydrogen 2 (grant agreement No. 101005934). The JU receives support from the European Union's Horizon 2020 research and innovation program, as well as from France, Austria, Denmark, Italy, the Netherlands, Germany, the United Kingdom, Poland, Belgium, Sweden and Norway.