About usWhat we doNewsCareerMediaContact
Languages
19. January 2023 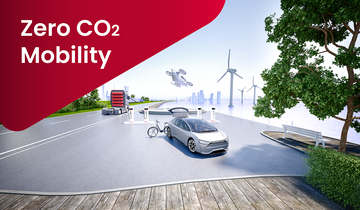 The international experts pleaded at the Zero CO₂ Mobility for the parallel pursuit and promotion of all technological alternatives from renewable energy sources for sustainable mobility. © FEV

Aachen, Germany, January 2023 – The international FEV conference “Zero CO₂ Mobility” was held at the end of 2022 and once again attracted top-class speakers. Participants were convinced that the 1.5-degree target of the Paris climate protection agreement in the transport sector can no longer be achieved with the measures introduced to date. Consequently, further tightened regulations for the phase-out of fossil fuels up to a ban on fossil fuels were discussed. At the same time, the experts in Aachen pleaded for the parallel pursuit and promotion of all technological alternatives from renewable energy sources for sustainable mobility – from e-vehicles to the use of green hydrogen in fuel cells and combustion engines to e-fuels for the existing fleet.

An online survey reflected the conviction of the more than 100 participating experts: 93 percent said that global warming will exceed +1.5 degrees by 2050, and a third of them even said it will be more than +2.5 degrees. “This makes it all the more important to finally push maximum speed ahead for the fastest possible transition away from all fossil fuels in the transportation sector,” said host Dr. Norbert W. Alt, COO of FEV Group, in his welcoming note. Although he assessed the development of electromobility worldwide as positive, with more e-cars now being sold in Germany than new cars with diesel engines. However, he said, the associated CO₂ reduction will not be significantly noticeable until 2040 and beyond due to the global existing fleet of around 1.4 billion passenger cars and light commercial vehicles. “That is why, in addition to electromobility, all technological solutions such as hydrogen in fuel cells as well as in internal combustion engines and additionally large quantities of sustainable fuels for the existing fleet must be pursued immediately and in parallel,” Alt said. “The frequent discussions about efficiency in non-fossil fuel generationare misleading. The world does not have an energy problem: about 60 minutes of solar energy reaching the earth’s surface is sufficient to meet the entire global annual energy demand.”

On the path to defossilization, green hydrogen is rated as the key potential energy carrier of the future. The EU recently released 5.2 billion euros to support a total of 35 hydrogen projects, flanked by another seven billion from private investment sources. In Aachen, the focus was on the current challenges in dealing with hydrogen, gaseous or liquid, on climate-neutral production, transport, storage, distribution, and infrastructure. Due to the high efficiency and ranges with short refueling times, especially heavy-duty commercial vehicles in long-distance traffic, various off-road applications, railroads and finally aviation rely on hydrogen and fuel cell drives.
In very concrete terms, Linde Engineering presented its three main objectives in the handling and transport of liquid hydrogen: reducing the dead weight of distribution systems and transport equipment using aluminum or composites, improving the value chain through shorter refueling times of transport equipment and fewer losses through highly efficient pumping systems.
As one of the world's leading e-fuels producers, HIF Global also reported on the commissioning of its site in Patagonia, Chile. There, green energy from a wind turbine and recycled CO₂ will be used to produce green hydrogen and process it with maximum efficiency into e-methanol, e-fuels, and other synthetic fuels. The company plans to have delivery capacities of 750,000 liters of e-methanol annually from 2023, more than 55 million liters of e-fuels from 2026, and more than 550 million liters of e-fuels from 2028. HIF Global aims to further decarbonize the transportation and mobility sector and significantly accelerate the hydrogen economy in a sustainable, competitive, and safe manner.
Regarding the wind turbine, Audi assumes an overall efficiency of 74 percent and thus almost the same value as for the generation of fossil gasoline.

Clear signals for technological change are also coming from e-mobility. The global availability of BEVs (Battery Electric Vehicles) has increased significantly, the extremely high efficiency of the electric drive is unrivaled and is therefore assessed as the main drive technology of the future to be used in passenger cars and increasingly also for truck applications. This is also reflected in the willingness and success of car manufacturers to consistently electrify their own icons: In Aachen, Volkswagen traced the path from the legendary cult object Vee-Dub to the all-electric ID.Buzz, which, as part of the decarbonization program, is the first CO₂ neutral Volkswagen produced and will be handed over to customers without the much-cited CO₂ backpack.
At the FEV conference, Indian manufacturer Mahindra outlined the political levers on its home market: targeted government support, such as for local battery and component production or the development of infrastructure, the stringent definition of national standards and concrete incentives for Indian OEMs are intended to achieve the transformation of mobility, which manifests itself, among other things, in the sales target of 10 million electric vehicles in India in 2030.
The Zero CO₂ Mobility Conference 2022 also reported on the further accelerated planned expansion of the charging infrastructure for BEVs, particularly in HPC chargers for long-distance mobility.

Solid-state batteries are also helping to accelerate the global availability of e-mobility, and they can score with tangible advantages compared to lithium-ion batteries: FEV partner ProLogium presented its latest product generation in Aachen, which features up to 79 percent higher energy density with 66 percent faster charging time and 16 percent lower costs compared to conventional lithium-ion technology. In addition, the used solid-state electrolyte is 90 percent recyclable as well as reusable, and the intrinsic safety of the batteries against thermal runaway has also been significantly increased.
FEV, as a partner company of ProLogium, has many years of experience in battery development. The customized design and integration of battery systems consider the battery management system as well as the cells, modules, and packs. Depending on the application, the company offers solutions with high specific power and energy density. With the eDLP near Leipzig, FEV operates the world's largest independent battery development and test center for high-voltage batteries.
It won't work without phasing out fossil fuels
Despite the impressive technological progress, the targeted climate goal for 2050 cannot be achieved unless stricter targets for reducing energy consumption and CO₂ emissions are implemented as quickly as possible, concluded numerous contributions as well as the exciting panel discussion at this year's FEV conference. The following options were discussed at this expert conference:

A “business as usual” is by no means any option: “Only all the above mentioned measures on aggregate can provide a way out of fossil fuels and towards achieving the 2050 climate targets in the transport sector. However, only if we start doing so immediately and in addition to the technological shift towards electromobility and hydrogen-based energy sources that has already begun,” Alt said in his closing remarks. “It is gratifying that almost all automakers are pushing e-mobility forward with great energy. However, it is important on the part of the legislator to create appropriate boundary conditions that make driving with fossil fuels unattractive. Mobility must be converted to regenerative electricity and regenerative H₂ based energy sources as quickly as possible. A significant CO₂ tax would be the right impulse from Brussels. The currently planned regulation of 5.5 percent RFNBOs fuel blending for existing fleets by 2030 and 100 percent e-vehicles by 2035 is completely insufficient for climate targets.”

The Zero CO₂ Mobility Conference 2023 will be held on 7 and 8 November in Berlin for the first time. More information can be found here