About usWhat we doNewsCareerMediaContact
Languages
26. August 2019 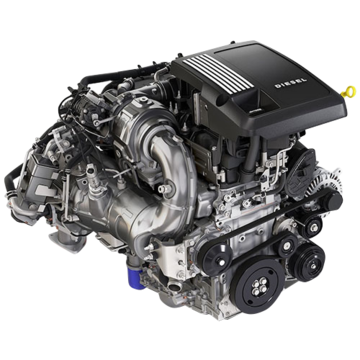 Clean, economical, and high-performance: The 3.0L Duramax diesel from GM

Aachen, August – The latest generation of advanced diesel engines contributes significantly to reducing CO2 emissions in the transport sector through their high combustion efficiency. In particular larger and heavier vehicles benefit from these characteristics. Thereby latest Diesel-engine technology supports meeting climate goals are being achieved. With the new Duramax 3.0L diesel, General Motors (GM) in collaboration with the FEV Group has developed a Diesel engine for heavy applications (light-duty pickups and trucks) that easily complies with demanding emission limits while achieving best-in-class fuel economy combined with superior refinement and driving performance. In addition to a high-power density, this also includes a favorable torque curve, which is particularly important for heavy loads. Other positive aspects are the engine's low noise emissions and high robustness.

The all-new powertrain is a clean sheet layout and is designed specifically for the full-size GM truck platform. The engine features a peak output of 204 kW and produces 624 Nm of torque. The all-aluminum six-cylinder engine will be installed in the next generation of the Chevrolet Silverado and GMC Sierra pick-up vehicles.

The development targets for the engine were extremely ambitious and targeted class leading performance and fuel economy, worldwide emission compliance and superior refinement. The targeted vehicle application in a full-size pick-up truck drove additional requirements for rapid load response from low engine speeds to support specific vehicle attributes such as towing capability. These targets posed a major challenge for the engineering teams from GM and FEV. The delivery of this challenge was made possible through the extensive use benchmarking and advanced simulation, experimental validation and calibration techniques.

The extensive usage of advanced development methods enabled the completion of the development in a compressed timeframe: The result is a compact, all-aluminum diesel inline-6 engine. The inline engine design is unique in this vehicle segment, which is dominated by V-engine designs. The in-line engine design helped to reduce emissions and fuel consumption, as it enables a close-coupled and thereby highly effective exhaust aftertreatment system and minimizes engine friction. These two aspects are key to the achievement of class leading fuel economy with the new Duramax Diesel engine, which is combined with a 10-speed automatic transmission.

“The result is something to be proud of,” states Professor Stefan Pischinger, CEO and President of the FEV Group. “The new Duramax engine fulfills the criteria demanded by customers in an impressive way. At the same time, it has very low fuel consumption values in its market segment and sets new standards – all at a competitive price.”

The all-new Duramax 3.0L Diesel engine is being produced in the new GM plant in Flint, Michigan (U.S.).