About usWhat we doNewsCareerMediaContact
Languages
05. May 2022 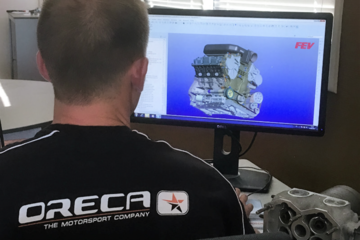 FEV supports ORECA Magny-Cours, one of the most respected names in motorsports, to develop a hydrogen internal combustion engine for the world-famous Dakar Rally in 2024. Source: ORECA/FEV Group

Saint-Quentin-en-Yvelines, May 2022 – One of the most respected names in motorsports, ORECA Magny-Cours (ORECA), is partnering with FEV – a globally leading engineering provider – to develop a hydrogen internal combustion engine for the world-famous Dakar Rally in 2024. The announcement marks a milestone in both motorsports and H2 engine development; bringing the power potential of hydrogen to the forefront, and significantly advancing the goal of zero-carbon motorsports and mobility.

As part of its involvement in the Dakar Future energy transition project, and following acknowledgement from France’s Vehicle of the Future automotive cluster, ORECA is stepping up its commitment to sustainable mobility a major way. The French team, with multiple motorsport championships and vehicle development hallmarks to its credit, is pairing with FEV to help fasttrack the development of an H2-combustion engine, suitable for Dakar Rally competition. The engine is slated to debut in a special section of the “The Dakar” in 2024.

FEV has almost 40 years of experience in hydrogen solutions, and is widely considered the benchmark for hydrogen-based propulsion development – along with many other forms of propulsion it specializes in across various transportation sectors.

“ORECA continues its exploration of alternative energies in the context of motorsports applications,” said Serge Meyer, Director of ORECA Magny-Cours. “It is with great conviction that we have chosen FEV as our partner to better understand the combustion of hydrogen and accelerate our development.”

“FEV is already deeply knowledgeable in the area of hydrogen, so this collaboration makes perfect sense. We are very excited to join forces with ORECA since not only does it reinforce our commitment to zero-CO2 mobility, but it also allows us to hone our expertise by purposefully targeting one of the most demanding environments possible – the Dakar Rally,” said Nadim Andraos, Executive Vice President of FEV France, Spain and North Africa. “It is an excellent example of how motorsports still plays an important role in development that subsequently benefits the masses through implementing solutions in series production.”

The choice of hydrogen over perhaps more conventional thermal systems is aimed almost exclusively at the desire to eliminate emissions derived through the use of carbon-based fuels. Because hydrogen is a carbon-neutral fuel, only minimal amounts of the emission components hydrocarbons (HC), carbon monoxide (CO), carbon dioxide (CO2), and soot are produced from burnt lubricant. The reduction of oil consumption is thus another focus of development.

The main exhaust gas component is nitrogen oxide (NOx). Thanks to its very high laminar rate of combustion and broad ignition limits, hydrogen allows for lean burning with a large amount of excess air. Its low exhaust gas temperatures mean that – even without exhaust gas aftertreatment – the level of nitrogen oxide is already below the current limits. Aftertreatment is an effective means of further reducing NOx emissions. Additionally, hydrogen engines are capable of achieving power outputs comparable to standard gasoline engines; which is a win-win, particularly when viewed through the prism of motorsports.

The FEV-ORECA partnership will be presented in two phases. The first, which is already underway, addresses technical requirements and simulation efforts, and is being managed entirely by FEV. The second phase is dedicated to designing, producing and testing a prototype, and will be managed by ORECA, utilizing their own specially-prepared test benches. The objective is to have variants wholly prepared to tackle the punishing extremes of the Dakar in time for a competitive debut in 2024.

About ORECA Magny-Cours
Strategically located in Magny-Cours near the F1 circuit, the ORECA engine department managed by Serge Meyer covers 3,600 m², including 1,800 m² of workshops, and houses four test benches as well as a high-end timing bench and a cylinder head blower. Boasting a staff of approximately fifty, the engine division has grown over the years to become a benchmark in France and Europe. In addition to specific equipment, this department has unique expertise in engineering, production and preparation. Capable of designing, building and developing an engine and its entire electronic control system from start to finish, this division consistently services the largest manufacturers in the world.