About usWhat we doNewsCareerMediaContact
Languages
20. January 2022 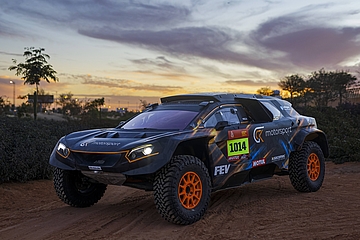 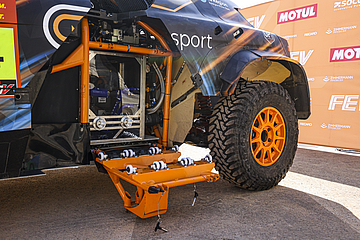 FEV’s partnership with GCK has resulted in the integration of a 200 kW on-board fuel cell system, which charges a latest generation lithium-ion battery with 50 kWh capacity. The battery powers the new 2-speed GCK electric motor with 320 kW (430 hp or 435 PS). Source: FEV Group

Aachen, Germany, January 2022 – FEV, a globally leading service provider in vehicle and powertrain development, supports GCK Motorsport, technological and media arm of Green Corp Konnection (GCK), to design and develop its own high-performance fuel cell system for a rally-raid vehicle:
e-Blast H2 will be using the system in the infamous Dakar Rally before it is being transferred to other industrial applications. A first demonstrator version was presented at the Dakar 2022.

Dakar organizers are aiming for an all-green entry list by 2030, providing fertile ground for companies looking to test the performance of their electrified mobility solutions. In November 2020, GCK Motorsport announced plans to go completely green with its cross-country efforts and unveiled a prototype of their hydrogen rally-raid vehicle on January 8 during the Dakar Rally 2022. Called e-Blast H2, the car will hit the tracks in 2024, featuring the first-ever fuel cell integrated into a rally-raid competition vehicle.

FEV is supporting this effort with its extensive design and development expertise. The partnership with GCK has resulted in the integration of a 200 kW on-board fuel cell system – one of the most powerful on the market. Thus, FEV and GCK are addressing two technological challenges: The integration of a high-performance fuel cell into a Dakar Rally car and its use under harshest environmental conditions. Ambient temperatures are reaching up to 50 °C and dust and continuous shocks of more than 10 g due to the bumpy tracks are being continuously applied to the vehicle and the fuel cell system.

The fuel cell is powered by 30 kg of hydrogen stored in four R134 certified tanks at a pressure of 700 bar. It charges a latest generation lithium-ion battery with 50 kWh capacity. The battery powers the new 2-speed GCK electric motor, which has been designed to reach 320 kW, or the equivalent of 430 hp (435 PS). This setup will allow GCK’s e-Blast H2 to run a 250 km special stage entirely powered by green energy.

A challenging project
For this Dakar Rally project, FEV has involved twenty engineers in France and Germany. The demonstrator version presented on January 8 at the Dakar 2022 showcases technical solutions and design options under realistic conditions. It will be further optimized and integrated into the vehicle, which is set to participate in the 2024 Dakar Rally event.

Following the 2022 Dakar presentation, GCK Motorsport and FEV will continue to optimize the fuel cell and the car through bench and dynamic testing on FEV's new test beds for hydrogen applications in Rouen. During the second part of the year, an extensive testing program under real rally-raid conditions will be focusing on further improving the powertrain. In January 2023, GCK Motorsport will enter e-Blast H2 in select stages of the 2023 Dakar before finally taking on the ultimate challenge and participating in the full event in 2024.